A&Ring and career development has always been the heart of our company. Focusing on selected talents and unique personalities, Starting Lineup has been consulting artists and providing guidelines to successful careers ever since. 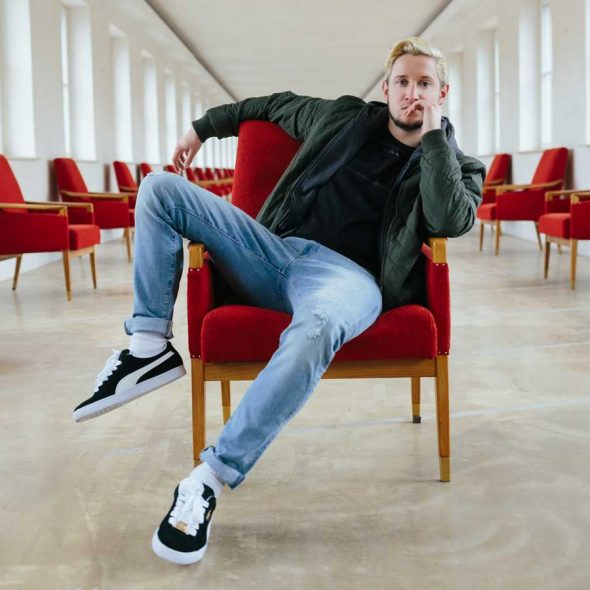 Starting out as one of Germany’s biggest musical talents, Teesy evolved into a multi-talented creative mastermind. After releasing a critically acclaimed debut album (2014) and a top 10 album (2016), his highly anticipated third studio album “Tones” is currently in the making. He writes and produces music for himself and other a-list artists, directs music videos and acts as a centerpiece of creative content. With his contemporary sound of hip hop, rnb and pop, he earned himself a prominent spot in the German music landscape. A recording studio with Teesy Tones at the helm is a weapon of pure creativity.

Crada is undeniably one of the most successful music producers in Europe. He rose into the highest rankings of musicians with releases for Drake, Kid Cudi, Jordin Sparks, Conor Maynard, Kendrick Lamar, Tim Bedzko, Tinie Tempah, Marlon Roudette and Rae Garvey, and his vast amount of international gold and platinum plaques. Crada established himself as an a-list music producer by specializing in the creation of original music where he always comes up with new sounds and moods and gets artists to share their innermost feelings on records with his heart wrecking ballads and emotional compositions.

A long-time affiliate of the Starting Lineup family, NKSN came up as the prominent background singer of Teesy and has drawn the more and more of the public attention on him – rightfully so. After releasing his first EP with the name “Beifahrer”, NKSN is currently promoting his biggest single so far by the name of “Perfect”, a down-low hit  and a homage to the streets of Berlin and its nightlife party scene. Get ready for more NKSN music in the next months while he’s preparing his first own tour and more festival shows for 2018.

Well known for his production work for german rappers Summer Cem, KC Rebell & P.A. Sports, he’s also part of the new Summer Cem & KC Rebell collaboration album “Maximum” which currently holds the top position of the german charts and claims #1. Illyland is one of the most versatile and skilled producers with an incredible ear for sounds and grooves and he keeps getting better every day. You can imagine how excited we are about this new partnership and we’re expecting a lot of big things to happen in the near future, nationally and internationally.

Being raised in Germany by Italo-British parents, having lived in Bali and in a demolished car in Australia, VLISTAIR is a multicultural music producer who combines the best of different backgrounds in his creative work. He now lives and produces music in the creative melting pot of London. His instrumental EP collected hundreds thousands of streams and the exclusive remix album for German platinum artist “Miami Yacine” got the whole scene looking. But his true love lies in the direct work with artists, who appreciate his diverse and always forward thinking sound. With this skillset VLISTVIR stands for a new generation of music producers, who work internationally and push a new refreshing musical style.

DJ Kitsune is one of the most influential djs in Germany. Awards like “Best National DJ” and nominations for “Best International Mixtape DJ”? Yes. TV and Radio shows in Europe and the US? He got it. Live shows with the biggest rap stars and symphonic orchestras? That too. With 15+ years in the music industry, DJ Kitsune has been named “the hardest working man in german hiphop”.

Knowing Rasul’s music means loving it. There’s no way around it and everybody knows that. What most people don’t know is, how much of a musical masterming Rasul is behind the music. From discovering some of the greatest producers of the continent to creating musical visions that give birth to milestone albums, Rasul has done it all and he’s doing it again while you read this.