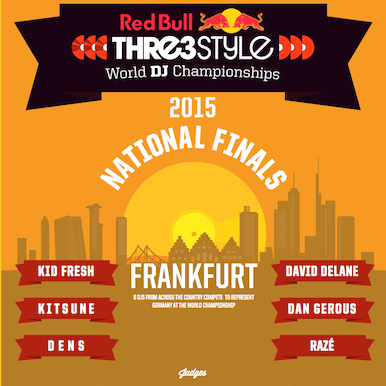 After performing a furious set at the 2014Red Bull Thre3Style National Championship, DJ Kitsune returns to the german national finals of what has quickly become the world’s most anticipated and influential dj competition. Bringing together outstanding djs from all genres to have them going head to head in a 15-minute performance, the Thre3Style challenge is a one of a kind event and yet the most crowd appealing dj championship at the same time. While skills, originality and creativity are essential for putting together a unique set, it all comes down to who rocks the crowd and can impress the judges with a great performance, state-of-the-art djing and true showmanship. The 2015 National Finals take place on Friday, April 17th in DJ Kitsune’s hometown of Frankfurt, Germany. The winner will advance to the World Finals in Tokyo in hopes to defend the world championship title who is currently held by german superstar dj Eskei83.