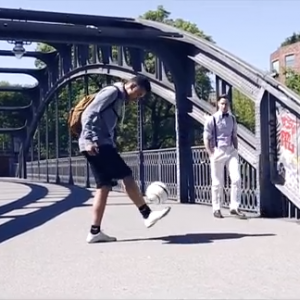 Starting Lineup signing Teesy was recently featured in the global “Risk Everything” campaign by Nike Football which not inlcuded a special showcase appearance at the Berlin based Nike House Of Phenomenon but also had the newcomer rapper spit a guest verse on the “Riskier Alles” posse cut which featured many of today’s top urban artists from Germany on a collaborative song. This also includes german heavywheight superstars Cro and Sido. The Nike Football “Risk Everything” campaign is based around the 2014 Fifa World Cup in Brasil and includes artists from all over the world.