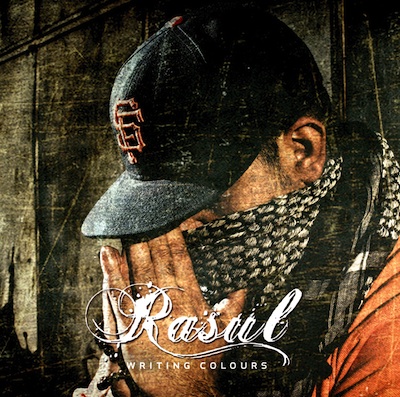 Throughout the past years of Starting Lineup Records we produced and released numerous projects, all of them being exciting, demanding and entertaining for us in their own way. None of all these releases, however, have been as special as this project. After Rasul’s untimely and surprising death on May 11th, 2010, his family asked us to put together his last, posthumous album “Writing Colours”, which we’re releasing in a close joint venture with Europe’s JUICE magazine. This is what the editors of JUICE have to say:

It’s an honor for JUICE to carry on the torch of an extraordinary talent with the release of this posthumous album. Rasul, formerly MC of legendary Munich rap group Square One, surprisingly passed away in summer of 2010. “Writing Colours” still, is by no means a collage of sound bits and pieces from the depth of old hard drives. All songs on this album had been fully recorded before Rasul’s death and are now being released the way he intended to do. Two thirds of the songs have been produced by the so far unknown beat-duo TrueStatiks. Driven by warm drums and soul samples, they follow in the footsteps of Rasul’s ingenious partner Iman, who he created the 2001 classic “Walk Of Life”. Ali’s musical son Crada contributed with some of his emo bangers he recently placed on albums for Drake and Kid Cudi. Ten years after the release of Square One’s masterpiece Ali and Iman reunite as well to make sure rap stays Soulmusik forever. “Writing Colours” is the perfect combination of the traditional Square One sound and the musically always up-to-date Ali. Rest In Heaven, Rasul.

“Writing Colours” will be released in Germany, Austria and Switzerland as part of the newest edition of JUICE magazine and will be available on June 10th, 2011 (subscribers) and June 15th, 2011 (newsstands).

All requests: info ( at ) starting-lineup.com